In a post some time ago I promised a few more details about a trip to Italy.  As usual I took much longer than planned to deliver on that promise...

One of the things most Mediterranean countries are known for is their food.  In the past I was not overly impressed by Italy's food and often jokingly remarked that they didn't even know how to properly prepare pizza.  I guess my previous opinion was based on the class of eateries I could afford to eat at during those trips to Italy.  This time around proper street restaurants were an option - and while they are really still beyond my financial means I had to reverse my opinion on Italian food.  They know how to cook!

It seems one of the secrets is their use of fresh produce.  Our journey therefore starts at Campo de' Fiori where merchants offer their produce, including fruit 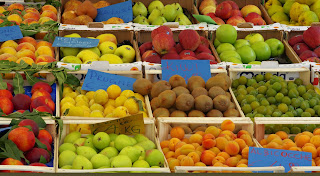 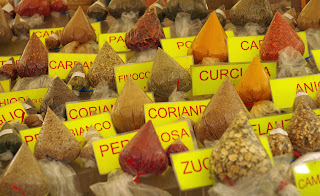 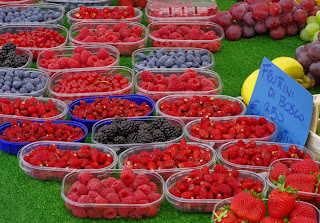 that exude freshness, nutrition and colour.

Campo de' Fiori is a public square where, amongst others, heretics - such as those who proclaimed the sun to be at the centre of our universe - were publicly executed.  However, for the past almost 150 years it has been best known for its morning markets.  Despite the fact that the stalls look like temporary structures  modern electronic equipment is used for weighing, payment and other functions.  Landline phones are even installed in some of the stalls. 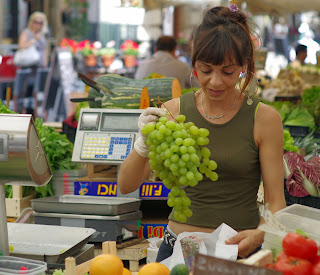 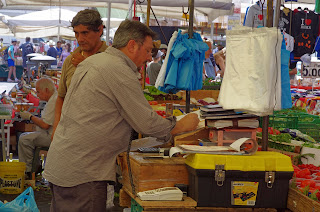 The customers seem to be satisfied - almost serenely so. 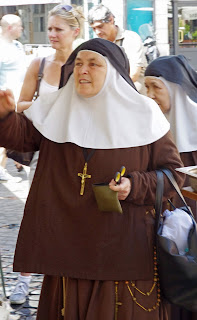 Some of the produce makes its way (perhaps not from Campo de' Fiori) to the local shops and restaurants.  This delivery is being made just down the street from the Trevi Fountain. 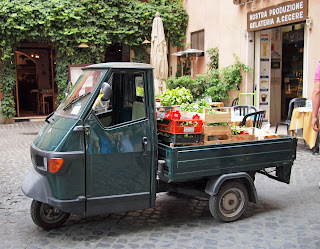 The restaurant in the picture below was just opposite our hotel.  It was interesting to observe how they displayed various types of food throughout the day in their window - depending on the time of day.  It was also interesting to observe how potential patrons would "window shop" and decide whether to eat here or something else based on the food that they saw.  If one decided to eat here one would typically pick a dish, from which they would remove or cut a piece and weigh it to determine the price. 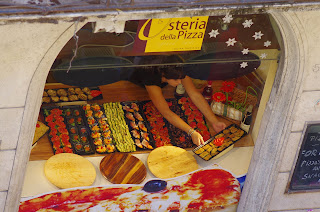 The food was delicious everywhere.  Consider, for example, a tomato and feta pizza (with olive oil, rather than melted cheese). 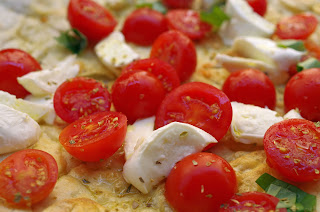 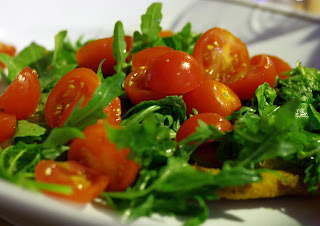 The Italians do indeed know how to eat...
Posted by Martin Olivier at 22:43